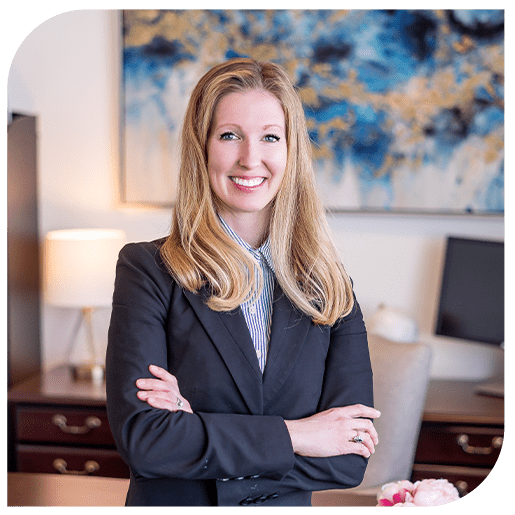 Elizabeth is a skilled attorney who possesses extensive courtroom experience.  She has recently been chosen as Best Lawyers in America:  Ones to Watch in the practice area of Personal Injury Litigation – Defendants.  Prior to joining the firm, Elizabeth served the citizens of Wyandotte County, Kansas as an Assistant District Attorney.  In that role, Elizabeth tried over 20 jury trials, and routinely secured guilty verdicts for a wide range of criminal offenses.  Elizabeth also has experience practicing before the Kansas Court of Appeals and Kansas Supreme Court, having successfully briefed and argued cases before both courts.

After leaving the district attorney’s office, Elizabeth transitioned her courtroom skills to a successful civil practice focused upon the defense of individuals and companies involved in litigation.  Elizabeth routinely handles matters involving catastrophic injury and wrongful death, trucking and transportation, professional and government liability, and brings the same zeal and dedication to her civil practice as she did to her prosecution of violent crimes.

During her many years of civil litigation practice, Elizabeth has taken cases to trial in Missouri, Kansas, and the U.S. District Court for the Western District of Missouri, and has achieved favorable outcomes for her clients.  Elizabeth is an active member of the Earl E. O’Connor American Inn of Court, which strives to promote excellence in legal advocacy with a particular emphasis on ethics, civility, professionalism and legal skills.  Elizabeth serves the citizens of Johnson County, Kansas as a member of the Johnson County Sheriff’s Office Community Advisory Relations Board.  Elizabeth also serves as a board member of the For Elysa Foundation, an organization dedicated to improving awareness, promoting research and providing hope to families affected by pediatric viral myocarditis and sudden cardiac arrest.

Elizabeth currently serves as the Diversity and Inclusion Chairperson pursuing minority candidates for positions with our firm, and also working with our local community through Habitat for Humanity, Harvester’s, Hillcrest KC, Johnson County Pro Bono Guardianship Clinic, and many other local organizations.

Outside of her practice, Elizabeth enjoys spending time with family, including her dog Judge Truman, running, and baking pies for Upper Crust Pie Bakery in downtown Overland Park, Kansas.

Weinstein v. Village Shalom & American Jazz Museum
Venue: Jackson County, Missouri Beth Evers defended this slip-and-fall case, in which the plaintiff claimed catastrophic injuries and sought a total of $2,500,000 in damages. Ms. Evers won summary judgment, resulting in a final dismissal and no liability for her client.
Gee v. Westgate Towers
Venue: United States District Court, District of Kansas Beth Evers won this housing, race, and religious discrimination case on a motion to dismiss, based on lack of jurisdiction and failure to state a claim under Kansas housing law. By disposing of the case early in the proceedings, Ms. Evers helped her client avoid the significant time and expense that litigation would have entailed.
Rogers v. Sentry Insurance and Cornejo & Sons, LLC
Venue: Sedgwick County, Kansas Elizabeth Evers Guerra successfully defended Cornejo & Sons, LLC in this wrongful death auto accident case. This case involved a multi-vehicle collision which occurred on northbound Interstate 35 (I-35) near Bella Plains, Kansas rest stop on September 19, 2014 at approximately 8:00 p.m. Decedent Douglas Rogers was operating his vehicle northbound on I-35 when he lost control, causing it to strike a concrete median and disabling his vehicle on the roadway. Rogers’ vehicle came to rest mostly in the outside lane of traffic near the bottom of a downgrade. Following his accident, Rogers exited his vehicle and was standing in the roadway next to his vehicle. Jessica Sybert was also traveling northbound on I-35 when she struck the rear of Rogers’ vehicle. Cornejo & Sons was operating a 2005 International Freight Truck northbound behind Sybert’s vehicle. When Sybert hit Rogers’ vehicle, it caused Rogers’ vehicle to rotate and strike Rogers, knocking him down and propelling him toward the grass shoulder/ditch. Upon seeing the collision, Cornejo applied brakes and swerved to the right toward the ditch, entering the grass and passing over Rogers’ body in the ditch. Rogers died of blunt force trauma to the chest. Plaintiffs sought total damages of $6.5 million. In successfully defending the case, the jury determined damages at a fraction of Plaintiff’s claim. It furthermore determined that Cornejo was only 5% at fault.
McCoy v. MDR Management, Inc.
Venue: Jackson County, Missouri Sean M. Sturdivan and Elizabeth Evers Guerra won a Motion for Sanctions and Motion to Dismiss for their client, MDR Management, Inc. in this Kansas City, Jackson County, Missouri employment discrimination case. Carol McCoy asserted claims of sex discrimination, disability discrimination and constructive discharge. Defense counsel proactively served written discovery requests upon Plaintiff at the start of the civil action. Counsel aggressively moved forward with Motions for Sanctions for Plaintiff’s repeated failures to timely respond to discovery requests and general failure to prosecute her case. Through this motion practice, Defendant convinced the Court to assess attorney’s fees against Plaintiff and to dismiss the case.
Cantrell v. Christensen
Venue: United States District Court for the Western District of Missouri (Kansas City) Bradley S. Russell and Elizabeth Evers Guerra successfully defended Christopher Christensen in this auto accident case. This case involved a rear end auto accident on March 18, 2015 in the westbound lanes of NW Chipman Road near the intersection of NW Ward Road in Kansas City, Jackson County, Missouri. Defendant admitted liability at trial such that the sole issue before the jury was damages. Plaintiff alleged that she sustained a serious neck injury that would require $214,000 in future medical expenses plus pain/suffering damages totaling a request for an award of over $500,000. In contrast, the defense argued that Plaintiff suffered nothing more than a cervical strain that resolved in eight weeks, culminating in total damages of $20,000. The jury awarded Plaintiff $10,000. Before trial, Plaintiff’s failure to timely designate experts resulted in a sanctions award of $12,956 to Defendant such that Plaintiff ultimately owed Defendant $2,956 after trial.

Named Co-Chair of the Publications Committee in 2021 of Eagle International Associates, Inc. and writes quarterly publications on a variety of topics, including pre-negligence waivers, minor settlements, and litigating.